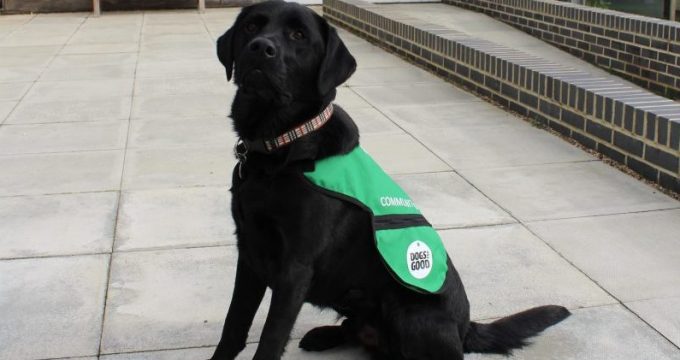 Billy the dementia dog working his magic to improve lives

Billy the black Labrador, who was named in honour of late Tynetec colleague Billy Graham, has been chosen to become the UK’s first dementia community dog as part of the Dementia Dog Project.

The Dementia Dog Project is a charitable collaboration between Alzheimer Scotland and Dogs for Good, and the first initiative of its type in the world to blend dementia specialist services with the provision of highly trained assistance and community dogs.

Community dogs like Billy are trained through the accredited assistance dog organisation Dogs for Good, and identified to join the Dementia Dog specialist team in Scotland, where the dogs undergo their advanced training at HMP Castle Huntly, an open prison near Dundee and the operational base for the Dementia Dog Project.

For the past several years, the Dementia Dog Project has been piloting the training of dementia assistance dogs so that they can be matched with couples who are living with dementia to help them remain independent in their own homes for longer. A recent three year grant from the National Lottery through the Big Lottery Fund will now allow the project to take their learning’s beyond an individual assistance dog approach, to also support people with dementia in community settings in trial areas of Scotland and England.

Tynetec colleagues made the decision to raise £15,000 to help sponsor a dog to be named Billy, in honour of their late colleague Billy Graham and his wife Lisa, who were tragically killed in the 2015 terror attack in Tunisia.

In December 2016, Tynetec, a brand of Legrand Assisted Living & Healthcare, presented the Dementia Dog Project with a cheque for £15,975 which will enable Billy to complete his advance training in Scotland and support him in his onward ‘career’ as a dementia community dog.

Billy’s Tynetec colleagues took part in a number of events including the Edinburgh Marathon, a 200 mile bike ride from the Grahams’ home town of Perth to Tynetec’s HQ in Blyth, Northumberland, and a quiz night at the company’s annual sales meeting which contributed to their monumental fundraising efforts.

National Sales Manager for Tynetec, Stuart Carroll, said: “Billy and Lisa were a wonderful couple who had experience of the challenges families living with dementia face. They also loved dogs and were aware of how much joy they can bring even in the darkest times.

“We all agreed sponsoring Billy was an opportunity to remember some special people in a way that we hope would make them smile, and also make a real difference to the lives of others in their time of need.” 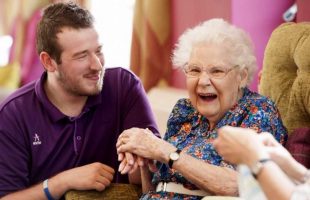