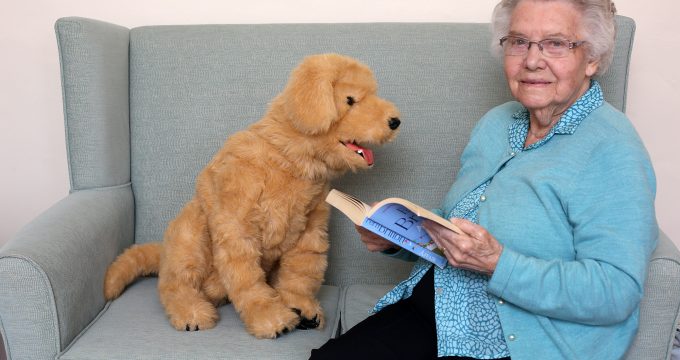 It may sound like science fiction but it is increasingly becoming science fact – robots are now an integral part of the care home environment.

As the ‘Alexa’ Amazon Echo technology is being trialled for social care by several councils, mechanised arms are being developed to lift patients without human assistance and Southend-on-Sea borough council has brought in its own robotic recruit – Pepper.

Council director of adult social care at the council Sharon Houlden said: “Robotics is not coming, it’s here. It is ground-breaking and it is interesting and not really spoken about in social care.”

Pepper costs £50k to buy but the council purchased it under academic licence for £17k as they are using him for research. Ms Houlden said that compared to, for example, buying a bariatric bed, it’s not that much money.

Pepper is a regular visitor to Priory House care home, Southend-on-Sea, which caters for older and frail residents.

Ms Houlden explains: “He acts as a master of ceremonies and question master during reminiscence sessions, and has an iPad to play videos and ‘Name that tune’. People then talk about what they saw and share memories. Care home staff can be as much a part of that as they want.

“Some people engage with Pepper as a person. It has generated a lot more ideas about what we can do. From a staff satisfaction point of view, it has brought the excitement back. We are in a very different place since we got him out of the box.”

Pepper is the latest in a not-so-long line of social robots being used in care. Perhaps, the most well-known is Paro the harp seal, developed in Japan to help people with dementia. 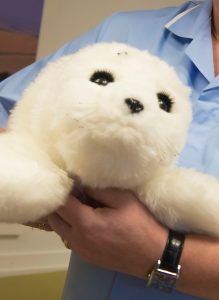 A study by the University of Brighton over the past three and a half years has found the furry robot has a calming effect on patients and provokes an emotional response that helps people socialise. The team are currently examining how Paro can be used without posing an infection risk (as he cannot be cleaned in a traditional way) and this autumn a new study will start into the robot’s role in reducing the need for medication.

Researcher Dr Kathy Martyn explained: “Paro can be used at any time of day or night. He does have the capacity to elicit human responses. He is the same size as a baby and has baby-like eyes. He makes a mewing noise when agitated. Most people do genderise them and give them names. People are rarely fearful.”

Dr Martyn also explained that Paro takes the form of a harp seal as very few people would ever have encountered one so the risk of a bad memory is much reduced compared with a cat or a dog.

She added: “They are several thousands of pounds, so a large initial outlay, but the benefit is, unlike real animals, he never has an off day.”

Care home group Care South introduced robotic pets at two of its care homes six months ago.  The animatronic pets at Kenwith Castle in Abbotsham, near Bideford, and Templeman House in Bournemouth respond to touch and speech from residents.

Robotic dogs KC and Biscuit (pictured, top) and pony Keno have been a hit among residents, according to Graham Brittain, director of residential care, providing stimulation, comfort and companionship. He said: “The residents love having the pets close at hand, so they can stroke them and give them lots of cuddles. Their engaging nature encourages the residents to interact with them and they have certainly become a talking point for our staff, residents and their families.

“Residents can often be found petting the robotic pets and reminiscing with one another about animals they owned previously and in childhood. Since their introduction to the homes, staff have seen improvements in some residents’ social interactions, particularly for those living with dementia. The robotic pets have also proved beneficial to residents in end-of-life care, who have taken comfort from the chance to touch and stroke the dogs, with carers noting the soothing effect they have and the pleasure displayed on their faces.”

While Care South’s new robotic residents were acquired second-hand, there are many similar models now on the market costing as little as £100, and the care home operator now plans to roll them out to its other care homes that look after people with dementia.